All public sector Christmas parties banned in Trinidad, Gov't urges private sector to do the same 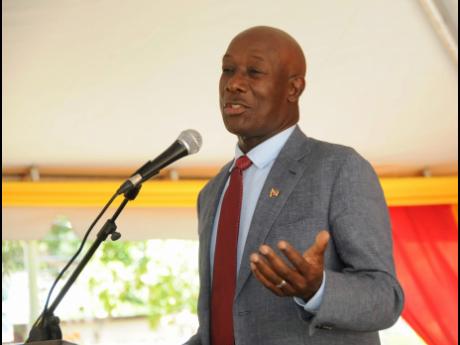 SCARBOROUGH, Tobago (CMC)— The Trinidad and Tobago government on Saturday announced a total ban on Christmas parties within the public sector, while also urging the private sector to do the same.

Prime Minister Dr Keith Rowley and Health Minister Terrence Deyalsingh told a news conference that instructions will be given to the appropriate public sector officials to ensure that government funding for Christmas parties over the coming weeks will not be entertained.

“There is to be no state-sponsored or Christmas party in the public sector,' Rowley said, acknowledging that the new order would have an effect on the economies of “those who supply the Christmas party, but this is to curb the spread of the virus”.

“It ought to be not only a holy Christmas, but also a quiet one,” Deyalsingh said, urging people to celebrate within their family unit and not invite people to partake in the celebrations.

Prime Minister Rowley said he is aware that many villas in Tobago have been fully booked for the Christmas Season and that while the government will not prevent people residing in Trinidad travelling to the sister isle for the Season, he is reiterating the need to follow all protocols and measures put in place to prevent the spread of the virus that has killed 113 and infected more than 5,000 people in Trinidad and Tobago.

Rowley, and Deyalsingh who were participating in a Ministry of Health news conference, said that his target remains for schools to be opened in January and that the actions of people during the Christmas period would determine whether that is achieved.

“Have a responsible Christmas. It is a big ask,” Rowley said, adding that the “issue we are fighting is the issue of contact, where there is congregation, stay isolated even from other members of your family”.

The Prime Minister warned that if the country does not “hold the line”, it will end up like many other countries that are now experiencing a new wave of the virus.

Rowley also announced that there would be no relaxation of the measures regarding the operations of bar and restaurants in the country, indicating that the policy does not prevent them from selling as much alcohol as possible.

“What it is not opened for is to allow people to come and congregate over alcohol,” Rowley said.

While the borders would remain closed allowing only for official exemptions, the government was now considering a proposal from the state-owned carrier, Caribbean Airlines, for the use of an early-testing programme to allow for an increased level of transportation.

The Government also announced a TT$30 million (One TT dollar=US$0.16 cents) initiative aimed at assisting persons who have lost their jobs, or have fallen on hard times as a result of the COVID-19 pandemic.