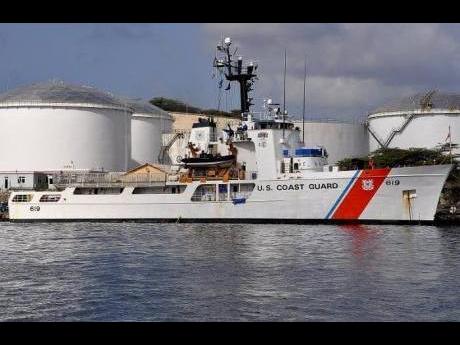 (CMC)- The United States Coast Guard says the crew of the Cutter Diligence has returned to home port in Pensacola, Florida after a 47-day Caribbean Sea patrol in which a significant amount of drugs were seized and suspected smugglers apprehended.

The US Coast Guard said on Friday that, during the patrol, the Diligence intercepted a vessel with about 150 gallons of suspected liquefied cocaine and detained four suspected smugglers.

Additionally, the US Coast Guard said the Diligence received, from other US law enforcement agencies, more than 7,700 pounds of narcotics and that six additional smugglers were apprehended.

The Diligence crew “orchestrated the successful transfer of the cases to US authorities for prosecution,” the US Coast Guard said.

“The 47-day patrol was also critical in allowing Diligence’s crew to work on shipboard training, qualifications and proficiency to maintain operational readiness,” the US Coast Guard said.

“Characteristic of a seagoing service, we never know what adventures lay ahead,” he said. “I am immensely proud of and impressed by Diligence’s crew for their steadfast ability to adapt to the task at hand and carry out the mission with professionalism and proficiency.”

The US Coast Guard said Diligence performed counter-drug operations in support of the US Government’s Joint Interagency Task Force-South, conducts detection and monitoring operations in the Caribbean “to facilitate the interdiction of illicit trafficking in support of national and partner nation security.”

The US Coast Guard said it works alongside inter-agency and international partners “to prevent and respond to dangerous and illegal maritime smuggling from Central and South America.”

“Diligence supported these efforts by patrolling the South western Caribbean Sea in an effort to detect and deter maritime smuggling in the region,” the US Coast Guard said.

It said the primary missions of the Diligence, a 210-foot medium endurance cutter, with a crew of 75, are counter drug operations, migrant interdiction, enforcing federal fishery laws, and search and rescue in support of operations throughout the Western Hemisphere.