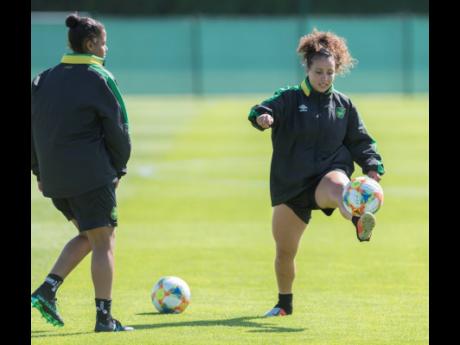 File Dominique Bond-Flasza (left) looks on as Lauren Silver controls the ball during a training session as the Reggae Girlz prepare for the FIFA Women’s World Cup in France last year.

National senior women's coach Hubert Busby Jr expects to see some more deals to be finalised for more Reggae Girlz to play overseas after two senior players were officially signed to clubs in Europe this week.

Busby believes having a huge contingent of Jamaican players plying their trades in Europe can only bode well for the national programme going forward, and it is now up to them to take the next step in their development.

"Ideally, they would have probably gone a little bit sooner, but the COVID-19 and the uncertainties caused a hold-up. It's great for our players to find contracts overseas ... it's up to them now to work hard and to contribute and improve within those environments," Busby told STAR Sports.

EXCITED FOR THE OPPORTUNITY

Cameron took to Instagram last Tuesday to express her excitement in joining her new team and playing in a new environment. "I'm honoured for this opportunity to compete in a league I've never played in before, to explore the beautiful city of Budapest and for the second time, get the opportunity to participate in a Champions League tournament," she said.

Ferencvarosi will take part in the upcoming 2020-21 Women's Champions League season; and Busby is targeting for the whole team to eventually be competing in the top leagues for quality teams.

"We have always maintained that, ideally, in the next few years we want all our senior women's team to be playing in the one of the top six countries in the world on top teams," Busby said. "But this is a platform to that because, obviously, not only would they be doing well for their clubs, they are putting themselves in the shop window for other potential suitors to come in and sign them for years to come. That's what we want."

Meanwhile, a loan move for captain Konya Plummer to Europe is still being worked on, according to Busby. She has yet to play for National Women's Soccer League (NWSL) Orlando Pride since being drafted earlier this year. Her club did not participate in the now-completed NWSL Challenge Cup tournament because of positive coronavirus cases.