Raptors hang on to top Grizzlies 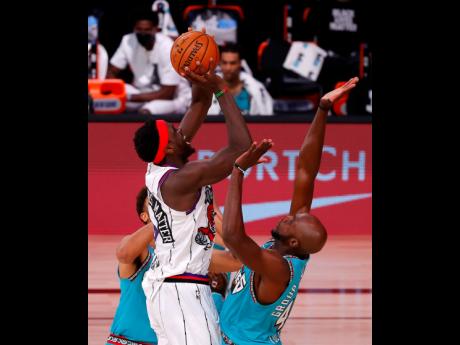 Norman Powell scored 16 points, and Kyle Lowry added 15 for the Raptors, who clinched the No. 2 seed in the Eastern Conference and their fifth consecutive season with at least 50 wins.

The Raptors have earned the right to rest their key players before the playoffs start.

"We've played heavy minutes," Raptors coach Nick Nurse said of his starters. "We did what we kind of needed to do to go 4-1 (in the restart) and put this thing where we needed it to be. I would say you'll see a little bit of everything here in the last three games as far as lots of guys playing."

Dillon Brooks scored 25 points, Grayson Allen matched a season high with 20, and Ja Morant had 17 points and 10 assists for the Grizzlies.

The Grizzlies dropped to 1-5 in the restart and are barely hanging on to eighth place in the West, with Portland, Phoenix, and San Antonio close behind. There will be a play-in series in the West, starting Saturday.

"I'm not worried about no play-in game right now," Morant said. "My focus now is learning from my mistakes from this game against the Raptors, try to fix them, and go out and play Boston."

Toronto scored 40 points in the second quarter and led 60-54 at halftime.

Lowry hit a 3-pointer as time expired in the third quarter to put Toronto up 88-71. The Raptors held the Grizzlies to 30 per cent shooting in the period.

Toronto led 94-79 before Memphis rallied with a 13-1 run that trimmed the Raptors' lead to 95-92. Siakam responded with two 3-pointers to help the Raptors regain control.

"There so many moments -- missed shot here and there," Memphis coach Taylor Jenkins said. "They made the plays down the stretch. Siakam -- what a heck of a game!"