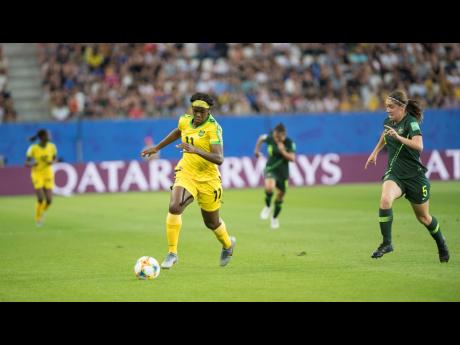 As national women's striker Khadija Shaw continues her second season with French club Bordeaux, Reggae Girlz coach Hubert Busby Jr has stressed the importance of her continuing to improve her craft while not worrying about her long-term future.

The 23-year-old Shaw is in the final year of her two-year deal with Bordeaux, which she signed in 2019 before Jamaica's historic Women's World Cup campaign. She scored 10 goals in her debut season and helped the club to finish third place in the COVID-19-affected campaign.

With no indication as to her future beyond this season, Busby says the main focus for her is to ensure that she continues to enjoy the game so that she can continue to improve.

"I think she has settled in, and I think transfer speculation aside, you can't control that," Busby told STAR Sports. "But I think the best thing for her is to just focus on improving, being that player that Bordeaux needs her to be, and then after that, everything will take care of itself."

French journalist Syanie Dalmat said that Shaw had a good first season in France and noted that being more precise in front of goal would be an area for her to improve. Salmat, who writes for noted French publication L'Equipe, said that should Shaw not stay with Bordeaux beyond next season, she could be a good fit for Paris Saint Germain or Lyon, the top two clubs in the country.

Will be of value

Busby says that she will be of value to any team and league that she goes to because of her ability but says that she is in a good situation with Bordeaux.

"Whether its Europe or the National Women's Soccer League (NWSL), she will be the focal point of any team she goes to because she is one of the best strikers in the world," Busby said. "But I think with Bordeaux doing relatively well, I think it's really about her just kind of focusing on being the best that she can be."

Dalmat said previously that Bordeaux has a chance of holding on to her because of their ambitions to play in the Women's Champions League.

Bordeaux are still winless to start the 2020-21 Division one Feminine season after their 2-1 defeat to defending champions Lyon on Sunday. Currently in ninth place with two points, they host Guingamp on Saturday, hoping for their first win of the season.