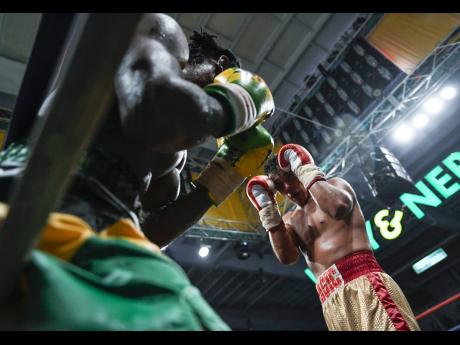 File Richard Holmes (left) leans against the ropes as Ricardo Salas attacks in the final of the Wray and Nephew Contender 2018 competition.

Veteran boxing trainer Carl Grant said the COVID 19 has dealt a massive blow to the career of his fighter Richard 'Frog' Holmes.

Grant told STAR Sports that with the cancellation of the number of local and Caribbean bouts, Holmes has been forced to do odd jobs as a means to survive during this pandemic.

"I never knew of him having a skill, and so it is the regular odd jobs. It is just one of those unfortunate situations that he is facing due to this COVID 19 pandemic," said Grant.

"It is tough on him because this pandemic has halted his boxing career, and most of the people are not hiring anyone, and so it is just fittest of the fittest will survive in this time and he has to be tough.

"He loves boxing and he wants to become top boxer in the world, and so this is really a tough blow for him in his career."

The 32-year-old Holmes, who is a native of St Mary, has recorded 19 victories and 12 defeats from his 32 career fights.

He was beaten by Indian boxer Sukhdeep Singh in his last contest in February.

However, before that, Holmes recorded an impressive victory over Guyana's Winston Pompey in December 2019. The stoutly built Holmes also lost in the final of the 2018 Wray and Nephew Contender competition to Ricardo Salas of Mexico.

Grant underscored that Holmes has kept himself in good shape and once boxing returns to the local scene, then his charge will be back in the ring competing.

"Once he is given the opportunity to box, then he will come and box," said Grant.

"I know that he is keeping himself in shape, but right now nobody knows what is going to happen because no one is going to put on a boxing match right now in Jamaica," he said. "Most of the countries are doing this 'bubble', but Jamaica can't afford a bubble."

He added that pandemic have also forced the closure of his operations at the Bruising Gym, which he operates in Stony Hill, St Andrew.