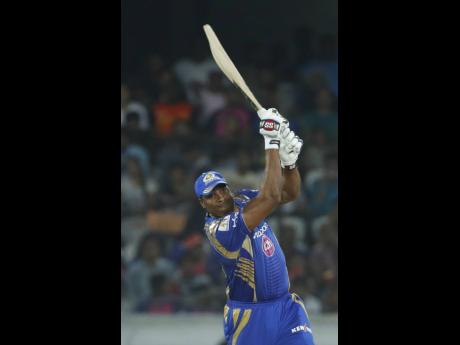 Kieron Pollard lashed a four off the final delivery of the game to earn Mumbai Indians a reprieve in the super over but the reigning champions then faltered, leaving Royal Challengers Bangalore with a dramatic victory in the Indian Premier League yesterday.

The West Indies white-ball captain stroked an unbeaten 60 off just 24 deliveries, while left-hander Ishan Kishan blasted a breathtaking 99 off 58 balls as Mumbai came within a whisker of successfully chasing down an imposing 202 at the Dubai International Stadium.

With 19 required from the final over sent down by seamer Isuru Udana, Ishan belted sixes off the third and fourth deliveries before holing on the ropes at long on off the fifth delivery.

And needing five runs to win off the final ball, Pollard pulled Udana to the ropes at square leg to level the scores.

Mumbai failed to find any real momentum in the super over and mustered only six runs, with Pollard hitting a straight four before picking out deep mid-wicket.

In defence of their small total, fast bowler Jasprit Bumrah kept Mumbai in the game with a stingy over but with two runs needed off the final ball, skipper Virat Kohli struck a low toss to the square leg boundary.

Sent in earlier, South African AB de Villiers (55 not out), 20-year-old Devdutt Padikkal (54) and Australian opening partner Aaron Finch (52) all hit half-centuries to power RCB to 201 for three off their 20 overs.

Padikkal and Finch put on 81 off 54 deliveries to provide the early momentum and when Kohli perished cheaply for three, Padikkal added a further 62 for the third wicket with de Villiers who then posted 47 with Shivam Dube (27 not out) in an unbroken fourth-wicket stand.

Reduced to 39 for three in the seventh over of their run chase, Mumbai's revival started when Ishan arrived at number four, the stylish stroke-maker striking two fours and nine sixes in an amazing display.

More importantly, he added 39 for the fourth wicket with Hardik Pandya (15) before putting on a decisive 119 for the fifth wicket with Pollard who belted three fours and five sixes to mark his 51st T20 half-century.

In one over from leg-spinner Adam Zampa - the 17th of the innings which leaked 27 runs - Pollard savaged the Australian with a four and three sixes off the first four deliveries as Mumbai gathered an astonishing 79 from the last four overs.